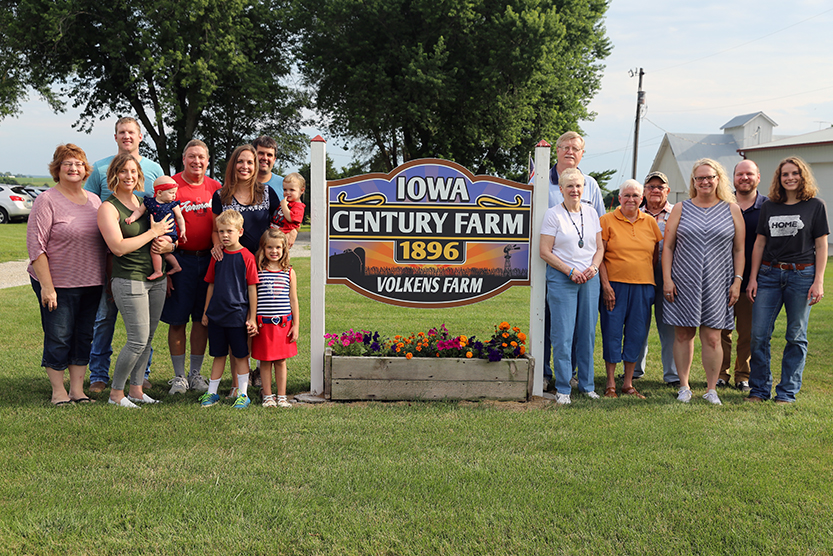 For more than a century, generations of the Volkens family have farmed a piece of land in the heart of Treynor.

Today the acreage rotates corn and soybeans on land that’s evolved with the small town around it. And the Volkens family has been there as farming changed, with handpicking giving way to ever-advancing technology.

“They would pick everything by hand,” Robin Volkens, who was the third generation to farm the land, said of his parents. “Mom and dad would throw crops on one side of the wagon, on either side of the ‘bang boards.’”

By the time Robin started helping they were using a corn picker, which later gave way to a combine. On a beautiful Friday evening Robin joined his sisters Gwen Henke and Roberta Zach and other family members in reminiscing about more than 100 years of family farming.

Bernhardt Volkens was the patriarch of the century farm. A native of Holstein, Germany, he came to the U.S. in 1885, according to The History of Treynor, a book published by the Treynor Town and Country Club. Bernhardt Volkens worked as a farm laborer for several years before marrying Anna Heesch in 1895. In November 1896, Volkens purchased the farm’s 120 acres at $50 an acre from Heesch’s family, according to the family.

The Volkens had a daughter, Marie, before Anna died young in 1897. In 1901, widower Bernhardt married Emma and together they had nine more children. The youngest, Benny Volkens, married Esther and the pair eventually purchased the farm and had three children – Gwen, Roberta, and Robin.

The siblings said growing up the farm they had corn, alfalfa, hay, oats and later soybeans, along with hogs, chickens, cattle, horses and numerous fruit trees.

Chickens used to run free on the grounds.

“We were free range way back when,” Gwen said with a chuckle.

“We were doing it before it was cool,” Roberta added.

“Mom and Dad butchered hogs and cattle for us, for our own meat. We had applesauce, rhubarb, cherries, green beans,” Gwen continued.

“Mom sold eggs out of the front yard,” Robin said, before expanding it to a business called B&E Egg Basket.

The kids were put to work on the farm at a young age.

“I started running the corn picker when I was 15,” Robin said.

Robin eventually took over operations from his parents. He married Jodi and had three children, including Kelsey, whose husband Perry Stupfell rotates corn and soybeans on the land these days, having taken over farming duties from Robin.

There’s a nice little patch of sweet corn near the house as well.

“Boy that sweet corn is good” Dick Henke, Gwen’s husband, said as the family sat on the back patio. “Gives me a belly ache, but it’s good.”

The farm originally sat on 120 acres, but over the years parcels were sold to the city, a local church and the school district, where a plaque at the athletics facility commemorates the family.

“The town grew up around the farm,” Jodi said.

At the 2015 Iowa State Fair the farm earned official Century Farm status from the state. Requirements include having the same family ownership for more than 100 years on at least 40 acres of land. The program started in 1976 as part of the Bicentennial Celebration, when over 5,000 certificates and farm markers were distributed across Iowa at local ceremonies, according to the Iowa Century Farms website.

“It’s very important. We all love the farm,” Roberta said, remembering her father. “Daddy loved it.”

Dick and Gwen have three children, Dave and Roberta have two children. The siblings each have a parcel of land that is part of the farm.

Robin, Gwen and Roberta collectively have 12 grandchildren, meaning there’s another generation that could take over the farm.

Next step: Heritage Farm status for 150 years of single-family ownership.

“Keeping this farm in the family is important,” Robin Volkens said.

About TS Ag Finance: TS Ag Finance is a DBA of TS Bank, located in Iowa serving the Midwest and beyond. The primary goal of TS Ag Finance is to partner with agricultural real estate originators, brokers and banks to help them retain and expand their ag client base and services offered. TS Ag Finance uses a network of national and regional team members with first-hand knowledge and years of experience in agricultural lending.